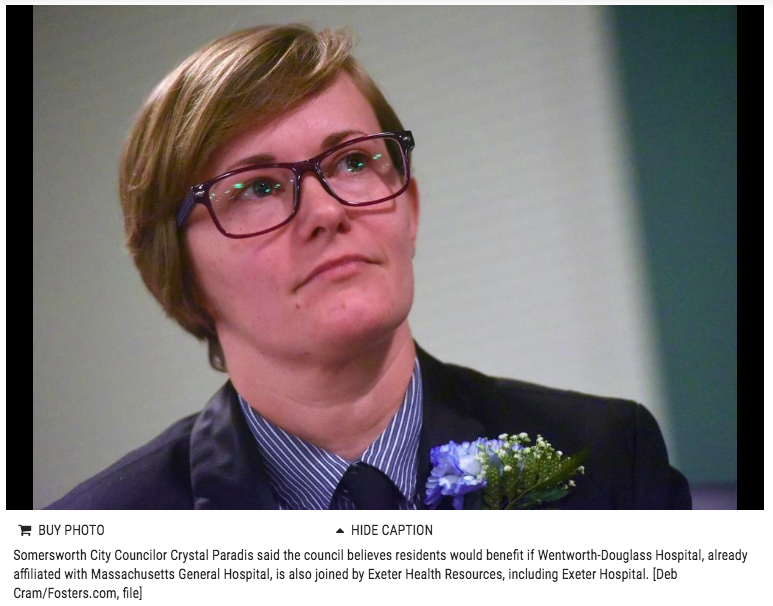 SOMERSWORTH — The City Council unanimously voted in favor of a resolution that would merge Exeter Hospital with Dover’s Wentworth-Douglass Hospital under the Massachusetts General Hospital umbrella.

The resolution was brought to the council by Ben Bradley, director of government relations and public policy for Wentworth-Douglass Hospital. It’s part of an effort to garner support from communities for the merger, which is being opposed by the New Hampshire attorney general.

“It shows Somersworth is in support of all the benefits it would bring,” City Councilor Crystal Paradis said of the resolution.

In September last year, state AG Gordon MacDonald announced his office’s opposition to the merger of WDH, MGH and Exeter Health Resources, citing anti-trust concerns with the proposed affiliation. Upon the AG’s Charitable Trust Unit’s assessment of other hospitals in the Seacoast area, MacDonald was concerned the merger would push competing health centers to the side and raise health care costs.

“We happen to disagree but hope to work (with the AG),” Bradley said.

“The proposed investment in mental health and substance use disorder would not only increase access to prevention and treatment programs but also help address social determinants of health including homelessness,” the resolution states.

City Councilor Martin Dumont called approving the resolution a “no-brainer” and expressed his unwavering support for the merger.

Benefits being touted by the local hospitals from the proposed affiliation include local specialized care for premature newborns, including a Level II nursery accessible on the Seacoast, access to lower cost options and advanced care from experts at MGH to local residents, including Somersworth.

The hospitals have been waging a public campaign to back the merger since the AG’s office announced its opposition.

I wish the Mayor, the new City Council and the new School Board a healthy, safe and successful term as they serve the people of Somersworth.

Despite a record number of unsheltered people seeking a place to stay, Dover, Rochester and Somersworth have dissolved the committee in charge of addressing homelessness in the Tri-Cities. https://www.seacoastonline.com/story/news/local/2022/01/05/dover-rochester-somersworth-homelessness-committee-dissolved/9076494002/

The Tri-Cities dissolved the committee in charge of addressing homelessness, with plans to organize a new group of city professionals. As the warming center sees record numbers of unsheltered clients, some question if now is the right time to change course
https://www.fosters.com/story/news/local/2022/01/05/dover-rochester-somersworth-homelessness-committee-dissolved/9076494002/

Getting vaccinated and boosted is the best way to keep yourself and those around you safe. Here is how you can register for your booster shot, if you haven't received it already:

Haven’t got your COVID booster yet? Sign up to get boosted at one of 14 locations across the state. We know boosters are the strongest defense against the omicron variant. You can register now.

Glad that my final piece of legislation unanimously passed Somersworth City Council this week. I hope that efforts to reverse the PUC's terrible gutting of the Energy Efficiency program are successful. These programs save taxpayer $, reduce rates & protect the environment. https://twitter.com/CP4Somersworth/status/1471919366828605443